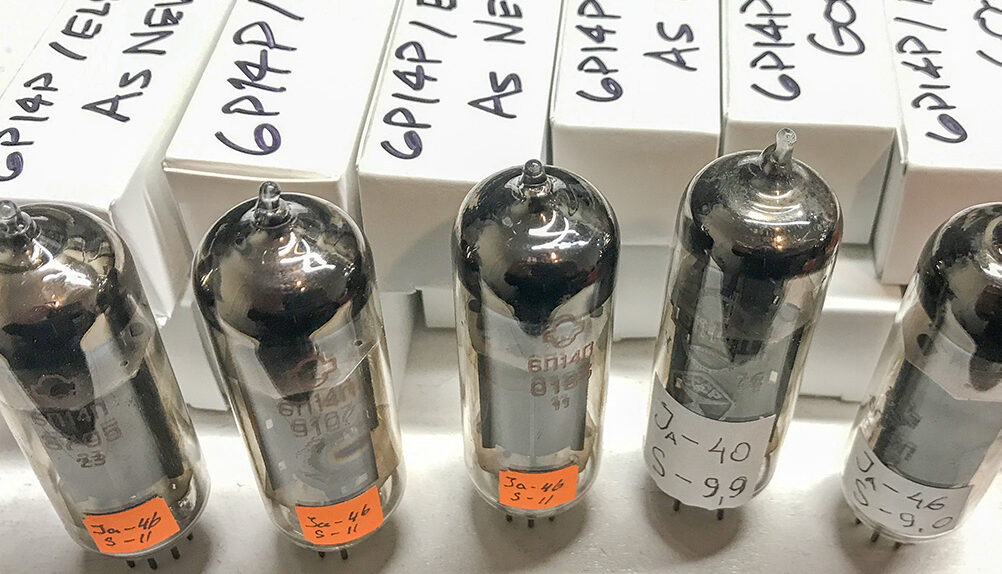 If you’ve searched ebay for EL84 / 6BQ5 vacuum tubes, you’re probably also seen listings for mysterious Russian-made tubes with the part number 6P14P (or the Cyrillic alphabet equivalent 6П14П) and wondered what the heck was going on with those. What is the difference, really, between 6P14P versus EL84?

The short/simple answer is: “Not much!” Mostly the differences come down to minor spec variations and that 6P14P tends to last quite a bit longer. A typical operating life for 6P14P is approximately 10,000 hours, whereas the average new-production EL84 tube has an expected life of 3,000 to 5,000 hours.

Another interesting difference is that the 6P14P has an astounding 10% variance in acceptable heater voltage requirements. An EL84, on the other hand, requires a very precise 6.3V heater voltage.

6P14P tubes (valves) are pin-compatible with EL84 / 6BQ5 tubes and will work just about anywhere you would normally use an EL84, including guitar amps, tube radios, and hi-fi stereo gear (like dual mono-block amplifiers). It’s possible there is an application where a 6P14P wouldn’t be up to the task, but I’ve not run across one yet.

I’m not Soviet-era tube expert, but based on a plethora of Google research, it would seem that 6P14P tubes were made from the 1960s through at least the early 1990s. They were made specifically for Soviet military use and are very robust, being heavier and generally having a much longer service life than a comparable EL84. As far as I can tell, all 6P14P tubes were made at the Reflektor manufacturing plant in Saratov, Russia. This is the same factory that makes Sovtek tubes, as well as several other popular new-production and reissue tube brands, including: Electro-Harmonix, Tung Sol, and Mullard (and probably others, but not that the new Telefunken tubes are made by JJ Tubes in Slovakia).

Most tube manufacturers don’t include date codes on their tubes at all, and this includes the vintage brands of the past. However, 6P14P tubes do have a very simple date included on almost all the tubes I’ve seen. It’s right under the logo and part number and is a very simple four-digit code showing the month and then last two digits of the year. In the photo below, the tube shown has a date code of 07 82, signifying it was was made in July of 1982.

Where to Buy 6P14P Tubes

These tubes are readily available on ebay (here’s an affiliate search link) and generally at very reasonable prices. However, almost all sellers are in former Soviet states (Ukraine and Belarus are popular), shipping costs can be high, and mostly what is available is pulled (used) old-stock tubes. Still, for the price and because 6P14P tubes tend to be very hardy, the risk is low as a US buyer.

If you are looking for US stock, I have some in my Etsy shop ready to ship. I have tested these tubes both on a vintage tube tester as well as in a guitar amplifier.