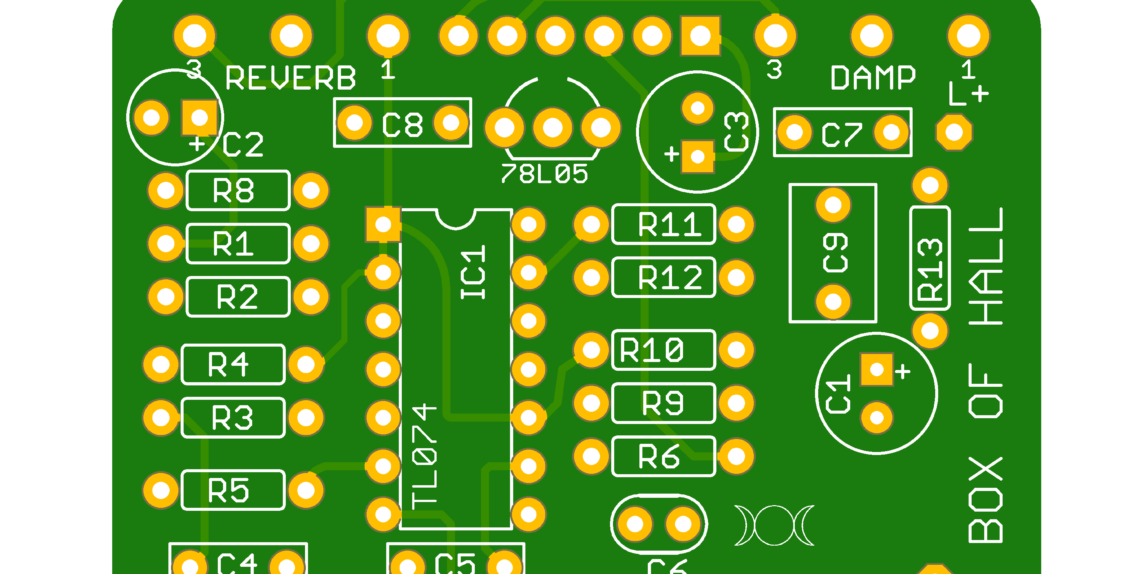 I came up with the Box of Hall reverb circuit way back in 2012. The Belton BTDR-2 bricks had just come out, and I wanted to have the first working circuit out on the DIY scene. A whole LOT of people copied this design and called it their own, but this one is the original (from your old pal culturejam).

To be blunt, this design is largely based on the Belton application note’s example circuit, but I  added a high-pass filter tone control and changed up other filter cutoff curves as well. I also added an op amp buffer for the virtual ground (VREF) used to bias the other three op amps in the circuit. Future versions also added a wet feedback loop to allow for better control of decay time, as well as wacky ambient swell capabilities. I will post that version in the near future. But for now, this is a nice, simple reverb circuit that anyone can build and that will sound great.

There is a fair bit of modulation happening in all circuits using the BTDR-2 brick, and that’s something that’s just a part of the brick. You can’t dial it out. But, it sounds pretty cool and adds a nice extra layer of complexity in the background. So if you like modulated reverb, you definitely want to build one of these.

Here’s a demo of the Box of Hall Reverb done by some other guy:

If you want to build one on vero board (tag board), here’s a good option.

If you’re more of a delay kind of person, check out the delay circuits I’ve posted.