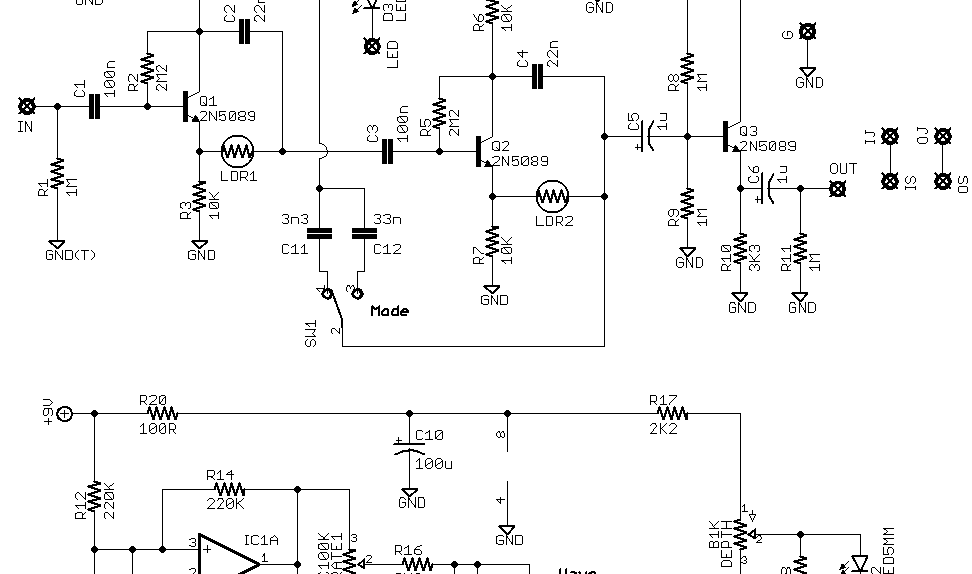 The DuoVibe Phaser Vibrato is yet another expansion on Tim Escobedo’s “Wobbletron” circuit snippet first published in 2005. I (culturejam) have done several circuit iterations on this cool little building block snippet (which is also very similar to the basic phase shift stage in a Univibe), and I feel that this one is a nice compromise between super-complexity and functionality.

The DuoVibe is a two-stage optical vibe circuit than can also cop subtle phaser tones. The LFO is modified from the Shoot the Moon Tremolo (itself derivative of the Tremulus Lune) and is capable of triangle wave and near-square wave output. The pitch bend in Vibe mode is discernible but not capable of “seasick” wobble. With the depth cranked, you can think of it as a sort of “tremolo with pitch funk going on” kind of thing.

There is a Vibe/Phase Mode switch, the name of which indicates its function and purpose. This switch simply toggles a feedback filtering cap value, but is useful despite the simplicity. See the mods section in the download pack (below).

Here’s a poorly recorded demo of the DuoVibe: