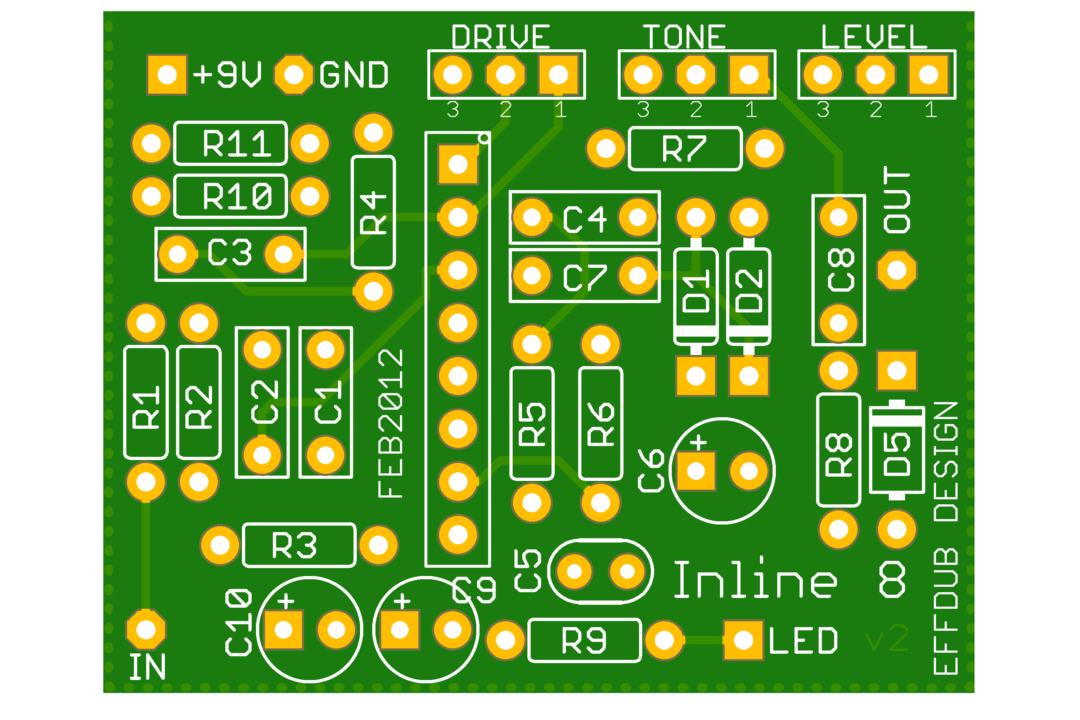 The Inline 8 is, in a nutshell, a stripped-down DIY Marshall Guv’nor * distortion pedal that was a hot item in the 1980s. The main difference is that instead of the three-band tonestack in the Guv’nor*, the Inline 8 has been reduced to a very simplistic single tone control that is used to tame the excessive highs that are present in many high-gain circuits.

The overall gain stages retain the same basic topology, but some values were changed to accommodate the wildly different tone control. The stock clipping diodes (1N914) are also different from the Guv’nor* (LEDs), giving a more “hair metal” sound. Perhaps the most visually striking difference is the use of an SIP (single inline package) op amp, as opposed to the now more common DIP (dual inline package) op amp.

The decision to go with SIP over DIP was purely cosmetic, but it does lend itself to a cool car-related name (“Inline 8”). This circuit bears some resemblance to a few current-production pedals, but it is not a direct clone of any given product. And all of them, most especially this one, owe a tip ‘o the hat to Marshall.

All files included in this here File Pack are free to use for any purpose, but hopefully you will make a modified DIY Marshall Guv’nor clone of your own and rock it out good and proper. Files included are schematic and layout images, as well as Eagle CAD files that can be used for modifying the design or simply ordering PCBs of the existing circuit/layout.

* Brand and product names are used for reference only. No affiliation of any kind regarding this project with any commercial brand, product, or company is either expressed or implied.